This is a help page for contributors or users.

This style guide for Clicklaw Wikibooks aims to help contributors produce Wikibooks with consistent and clear language, layout, and formatting. This guide is to be used in conjunction with the Clicklaw Wikibooks Contributor Guide, which provides guidance on the technical aspects of editing and updating content.

The title of a page should be in plain language (as a description of the topic or, for Legal Help for British Columbians, a question), concise, and consistent with the titles of related pages.

The following points are important with page titles:

Headings within a page are produced by typing multiple equal signs. A primary section heading is written ==Words in heading==, a subsection below it is written ===Words in heading===, and so on (a maximum of five levels is possible). Spaces between the equal signs and the heading text are optional, and will not affect the way the heading is displayed. The heading must be typed on a separate line. Include one blank line above the heading, and optionally one blank line below it, for readability in the edit window. (Only two or more consecutive blank lines will add more white space in the public appearance of the page.)

The following points apply to in page headings:

In general terms, resist using capital letters, as they hinder the reader when overused.

Do not use capitals for emphasis

Do not use capital letters for emphasis; where wording alone cannot provide the emphasis, use italics.

Titles of books and other print works are given in title case — that is, the first letters of all words should be capitalized except for articles (the, a, an), prepositions (in, of, to, from, with, etc.), and conjunctions (and, but, for, or and nor).

Do not capitalize directions such as "north", nor their related forms.

Capitalize names of regions if they have attained proper-name status, including informal conventional names — e.g., "Lower Mainland". Do not capitalize descriptive names for regions that have not attained the status of proper names, such as "northern British Columbia".

Names of particular institutions are proper nouns and require capitals, but generic words for institutions (e.g., "university", "college", "hospital", "high school") do not.

Italics may be used sparingly to emphasize words in sentences (whereas bold is normally not used for this purpose). Generally, the more highlighting in a page, the less its effectiveness.

Use italics to bring attention or distinction to a term — e.g., "Whether a party has the right to bring a dispute under a particular act and before a particular court is a question of that party's standing, whereas the ability for a court to hear particular disputes or questions involving particular types of parties is a question of jurisdiction." or "The term ex parte means without notice."

Do not use quotations for emphasis.

Use italics for the titles of books or publications of greater length (including wikibooks). The titles of articles, chapters, and other short works are not italicized; they are enclosed in double quotation marks. (See examples below.)

Use bulleted lists to break up a list of items. Use numbered lists if the list is a series of steps.

Where the bulleted list has items that are less than a full sentence, use commas between the items, start each item with a lowercase letter, and use a conjunction after the second-to-last item. For example:

To qualify for disability benefits, you must:

To make scones you need:

Where the bulleted list has one or more items that are a full sentence or longer, use periods between the items. For example:

Your best bets are:

Where a heading for a bulleted list item is appropriate, use a colon after the heading, and a period at the end of the item:

Use numbered lists if the list is a series of steps.

Use double quotation marks; use single marks for quotes within a quote.

Periods and commas go inside quotation marks, but semicolons and colons go outside.

Do not use quotations for emphasis. Use italics. See Emphasis.

Do not use quotations when clarifying the acronym to be used for a long term. Use parenthesis only. See Acronyms.

When citing a case, use the citation standards in the Canadian Guide to Uniform Legal Citation (7th Edition), known as the McGill Guide. Names or initials of the parties in the style of cause should be italicized, along with v., Re, (ad litem), or any other part of the case name/style of cause. Do not use bold. If the parties are named by initials, use punctuation between the letters. Cite Canadian cases to their neutral citation, and ensure that the link you provide is the short URL resource link provided by CanLII wherever possible. Where no neutral citation is available, use the citation that CanLII provides, and ensure that the parties in the style of cause are as indexed by CanLII. Where a case is not available on CanLII, cite to a printed reporter or electronic service. Examples of acceptable citations:

When referring to a publication that is a book or other longer work, put the title in italics:

When referring to a wikibook, put the title in italics:

When referring to a publication that is a shorter work like a chapter or fact sheet, put the title in quotation marks:

For publication titles, use title case; that is, the first letters of all words should be capitalized except for articles (the, a, an), prepositions (in, of, to, from, with, etc.), and conjunctions (and, but, for, or and nor).

Think twice about adding paragraphs from reasons for judgment. Pause before pasting in dense legislative text. It may be more helpful to spare the legalese if your readers are still seeking to understand basic legal principles. Cite and link the original law or case on CanLii for deeper study, but consider if you can convey the pith and substance of the law, without the need to regurgitate its chapter and verse.

This said, in some cases it's critical to show readers the exact, verbatim wording from a piece of legislation, court decision, or other source.

Short quotations (less than a paragraph and no more than a few sentences) can be enclosed with quotation marks and reproduced in-line with the text, e.g.:

For longer excerpts, use a block format. Clicklaw Wikibooks has two methods for block formatting depending on the type of source.

Clicklaw Wikibooks uses blockquote tags <blockquote>...</blockquote> (including multiple indentation levels where applicable), and a monospace font () if the excerpt is taken from an act, regulation, contractual agreement or court order (as distinct from reasons for judgment). Doing this distinguishes the codified language and hierarchical structure of these sources compared to the more narrative and natural language flow of other types of content.

A block formatted excerpt in a monospace font looks like this:

s. 19(2) The court may impute such amount of income to a spouse as it considers appropriate in the circumstances, which circumstances include the following:

(b) the spouse is exempt from paying federal or provincial income tax;

(c) the spouse lives in a country that has effective rates of income tax that are significantly lower than those in Canada;

(h) the spouse derives a significant portion of income from dividends, capital gains or other sources that are taxed at a lower rate than employment or business income or that are exempt from tax.

Longer direct quotations of text written in natural language (like court judgments) are also block formatted, but maintain the default typeface. The block formatted indented excerpt is enclosed in quotations. If the excerpt is longer than one paragraph each paragraph begins with an open quote, but only the final paragraph ends with a close quote.

A block formatted excerpt of a typical case looks like this:

In Contino v. Leonelli-Contino, 2005 SCC 63, the Supreme Court of Canada said this about child support payments where there is shared custody:

"[37] The framework of s. 9 requires a two‑part determination: first, establishing that the 40 percent threshold has been met; and second, where it has been met, determining the appropriate amount of support.

"[38] With respect to the second part of the determination [...] courts across the country have struggled to develop an interpretation of s. 9 that is consistent with the Guidelines’ objectives. While the approaches vary widely, they can be divided in two categories. One approach, similar to the approach used by the motions judge, can be described as the “formulaic approach”. The other approach, which may be described as the “discretionary approach”, eschews the use of formulae."

Make links only where they are relevant and helpful in the context; excessive use of hyperlinks can be distracting, and may slow the reader down.

Use an em dash when you want to indicate added emphasis, a break in a sentence, or an abrupt change of thought. For example, "In matters of importance, sincerity — not style — is the vital thing."

Do not use period marks for acronyms or abbreviations, e.g.:

If a long phrase, term or name of an institution is better referred to by an acronym, help the reader by defining the acronym the first time it is mentioned. Use parenthesis to enclose the acronym, but avoid quotations or periods, e.g.:

We are writing with the public reader in mind, not lawyers or other legal advocates. Depending on the wikibook, you may need to aim for a low reading level. Legal Help for British Columbians serves very basic information so people can take the first step towards finding help for their common legal problem. JP Boyd on Family Law presumes a higher reading level, since it offers motivated self-represented individuals a slightly more detailed description of family law. Both groups of readers benefit from plain language writing methods. Some tips to consider when writing or reviewing legal information for the public:

Try an app to help you edit

Hemingway App is a free online tool that analyzes your writing's readability and identifies possible problems. It can suggest improvements and help with plain language. The Hemingway App shows you a graded score (e.g. Grade 9), and highlights what's hard to read, what words could be simpler, etc. Just paste in your writing the and Hemingway App instantly provides suggestions and tips for improving readability. You can even edit your writing right there and then to see if you can improve it and bring the reading level down. A grade 9 reading level is ideal. 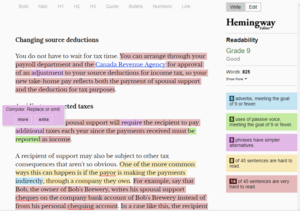 Avoid using legalese. These words and expressions are to be avoided:

Use that (not which) to introduce a restrictive relative clause (a clause that is essential to the grammar of the sentence).

In 2017, an editorial decision for JP Boyd on Family Law was made to use "they" as a singular pronoun. "They" should be used instead of "he or she". If the use of "they" feels awkward, consider revising the sentence structure to avoid the use of a pronoun. For example, acceptable alternatives to writing "if a party fails to respond, he risks default judgment" include:

This alphabetical list features the preferred usage for words: