In 2000, the United Nations adopted the Protocol to Prevent, Suppress and Punish Trafficking in Persons, especially Women and Children. The Protocol establishes the most widely accepted international framework to fight human trafficking, especially of women and children.

Canada ratified the Trafficking in Persons Protocol in 2002 and is committed to developing laws and programs to implement it. The Protocol requires countries that have ratified it to focus on three main areas, referred to as the three P's:

Human trafficking is a serious criminal offence in Canada. Both the Criminal Code of Canada and the Immigration and Refugee Protection Act criminalize all aspects of human trafficking.

The four human trafficking offences in the Criminal Code are:

A person cannot legally consent to being exploited under the Criminal Code.

This law criminalizes the bringing of people into Canada through specified means. It is an offence to use deception, coercion, abduction, fraud, force, or threats of force to transport someone across the border. It is also an offence to hide or transport people who have been recruited in this way, once they arrive in Canada. Penalties for these offences are up to $1 million in fines or life in prison or both.

The Act makes it an offence to use identity documents, such as a visa or passport, for the purpose of human trafficking or smuggling.The maximum sentence for this offence is 14 years in prison.

For the complete text of these Criminal Code and Immigration and Refugee Protection Act sections, visit laws.justice.gc.ca.

BC's Office to Combat Trafficking in Persons (OCTIP) is responsible for the overall coordination of the provincial strategy to address human trafficking. Fighting human trafficking requires a multidisciplinary response involving participation from all levels of government. The OCTIP works with both federal and provincial governments, law enforcement, academic organizations and community agencies. 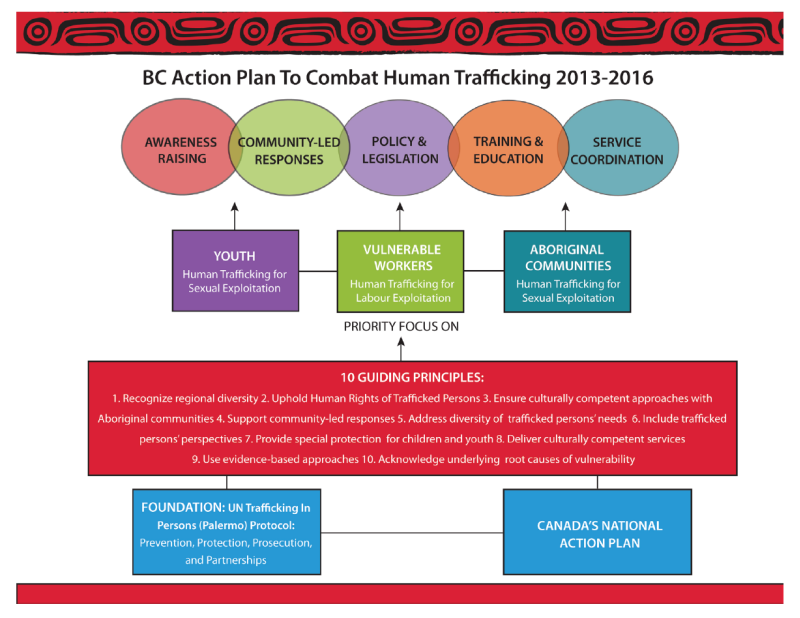 British Columbia has a BC Action Plan to Combat Human Trafficking which lays out three key priorities and five priority action areas for responding to human trafficking issues across the province for the years 2013-2016.

There are many challenges for law enforcement, for example:

Community-based agencies are enhancing their knowledge to extend support services to emerging trafficked persons. Faith-based organizations are also contributing efforts to eliminate human trafficking by raising awareness of the issues within their congregation and community.

The Trafficking in Persons Protocol emphasizes respect for the human rights of trafficked people and urges countries to cooperate with non-governmental organizations to provide for the basic needs of trafficked persons.

A comprehensive list of services is available through OCTIP's training site at www.pssg.gov.bc.ca/octiptraining.

Key services a trafficked person may require include:

The Trafficking in Persons Protocol also requires countries to consider adopting laws that allow trafficked persons to remain in the receiving country, temporarily or permanently. A Temporary Resident Permit (TRP) is available from Citizenship and Immigration Canada (CIC). The process starts with an interview with an immigration officer. At this point, the trafficked person does not have to prove that they have been trafficked, only that there is a possibility. The trafficked person is not required to help in any criminal investigation or to testify against their trafficker.

If the immigration officer believes a person may have been trafficked, they can issue a TRP. This gives the person legal status in Canada for up to 180 days. The permit can be re-issued at the end of the 180-day period by the CIC officer based on the trafficked person's situation. The trafficked person will have access to health care and counselling and they may also apply for a work permit.

For more information on the TRP, see Human Trafficking: Canada is Not Immune, Module 4.

Keep in mind the following principles when applying a human rights approach to providing services:

A complete list of guiding principles is available at www.pssg.gov.bc.ca/octiptraining.

A mandatory direction of the court that is binding and enforceable upon the parties to a court proceeding. An "interim order" is a temporary order made following the hearing of an interim application. A "final order" is a permanent order, made following the trial of the court proceeding or the parties' settlement, following which the only recourse open to a dissatisfied party is to appeal. Failing to abide by the terms of an order may constitute contempt of court. See "appeal," "consent order," "contempt of court," "decision" and "declaration."

In law, something that is relevant or important. A material fact, for example, is a fact relevant to a claim or a defence to a claim. See "claim," "evidence" and "fact."

The use of force or intimidation, whether emotional or physical, to compel another person to do something; interference with another person's freedom of choice to obtain an outcome, action, or behaviour.

The taking of a person by force or fraud. In family law, also the taking of a child contrary to a court order or without the permission of a guardian. In certain circumstances, the abduction of a child by a parent may be a criminal offence.

An act; a statute; a written law made by a government. See "regulations."