Human trafficking is a violation of human rights and a serious crime. 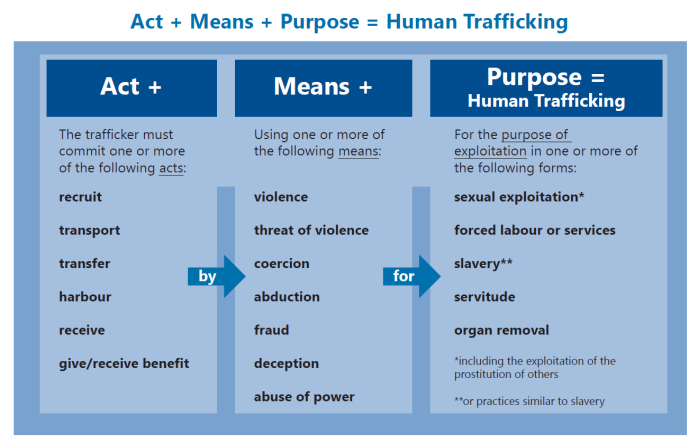 In cases involving children, human trafficking is established if it is shown that the child has been recruited, transported, or harboured for the purpose of exploitation. The exploitation of trafficked persons can take many forms.

Trafficked persons are forced into prostitution, forced to perform sexual acts such as exotic dancing and massage, and forced to participate in the production of pornography.

Forced labour is any work or services which people are forced to do against their will – under the threat of some form of punishment. Forced labour is found in industries such as agriculture and fishing, domestic work, construction, mining, manufacturing, prostitution, and illegal activities often related to the drug industry.

There is a high demand for organs on the black market around the world. Coerced organ removal is often conducted in clandestine clinics, with little or no attention to the person's postoperative care and little payment to the person.

It is important to remember that no one can legally consent to being exploited. For example, someone agrees to move to Canada because they have been promised employment in a legitimate job. Instead, they are coerced through fear and threats of violence, into forced labour. The fact that an individual may have consented to work in Canada cannot be used as a way to justify their working in conditions as described above.

How does human trafficking differ from human smuggling?[edit]

The crime of human trafficking does not require the movement of a person across a border. By definition human smuggling is a transnational crime. Human smuggling, also known as migrant smuggling, means helping someone enter a country illegally in exchange for some form of payment. This can involve dangerous travel conditions or the use of false identity documents under the consent of the smuggled person. People may be smuggled individually or as part of a large group.

In Canada, the Immigration and Refugee Protection Act makes human smuggling an offence.

In law, the interpretation of something, like a document or a set of circumstances, so as to give it meaning. For example, if a separation agreement stated that one guardian "will have the children on Monday, Tuesday, and Friday" but didn’t say anything about the other guardian, the agreement would be constructed to mean that the other guardian would have the children on the days that weren't mentioned.