From Clicklaw Wikibooks
Jump to navigation Jump to search
The printable version is no longer supported and may have rendering errors. Please update your browser bookmarks and please use the default browser print function instead.

Family law has changed a lot over the past 15 years or so, especially if you live in British Columbia. In 2010, special Supreme Court rules, just for family law cases, were introduced. In 2013, the Family Law Act replaced the Family Relations Act and brought in:

In 2019, the Provincial Court established a pilot project in the Victoria courthouse aimed at the early resolution of family law disputes. A whole new set of court rules were developed, and in May 2021, the new Provincial Court Family Rules came into effect. As a result, we are working on updating all references and discussions related to family matters in the Provincial Court. In the meantime, portions of JP Boyd on Family Law that talk about Provincial Court processes, rules, and forms should be considered out-of-date.

In 2020, the Family Law Act was changed to cover the arbitration of family law disputes, in terms very different from those of the old Arbitration Act, and the Victoria pilot project was expanded to include the Surrey courthouse. Of course, 2020 was also the year that the spread of COVID-19 resulted in huge changes to day-to-day court processes.

In 2021, sweeping amendments to the federal Divorce Act came into effect that changed how we talk about parenting after separation, and introduced a new test for figuring out children's best interests and a new test for when someone wants to move away. Thankfully, for people already used to the Family Law Act, the changes to the Divorce Act felt very familiar, as if the federal government had simply copied huge portions of our provincial legislation. However, the changes to the Divorce Act also resulted in changes to the Child Support Guidelines, changes to the forms used by the Supreme Court, and the introduction of brand new forms used when someone wants to move away (or objects to someone moving away).

This page provides an overview of the other changes that have happened in the last couple of years, including the amendments to the Family Law Act about arbitration, the new Provincial Court Family Rules and the early resolution process, and the changes to the Child Support Guidelines and the forms used by the Supreme Court resulting from the amendment of the Divorce Act.

New Rules, Forms and Processes for the BC Provincial Court

In May 2021, the Provincial Court adopted a new set of Provincial Court Family Rules while also expanding its use of Early Resolution Registries. These are big changes which means that much of the discussion and references to Provincial Court rules, forms, and procedures in JP Boyd on Family Law (which were reviewed in 2019) are out-of-date and should be treated with caution.

Details about how the new rules and the early resolution process work is available from the provincial government on its website. You can read an overview about the Early Resolution Model published by the BC Government, and read a summary about how the new Provincial Court Family Rules have changed.

Enforcing awards: Awards are binding on the parties to arbitration under section 19.16. Under section 19.20, awards can be filed in court and be enforced by the court as if they were court orders.

Don't worry, none of the really important parts of the Child Support Guidelines have changed. The only changes that have been made update the Guidelines to use the new terminology found in the Divorce Act.

We mentioned that there are a new set of forms for Provincial Court. There are also new forms for family matters in the BC Supreme Court, as well as new forms in the new Divorce Act. Two of the forms in cases before the Supreme Court have been updated and a new form has been created. The Divorce Act provides three brand new forms used when someone wants to move away after separation, called relocation. 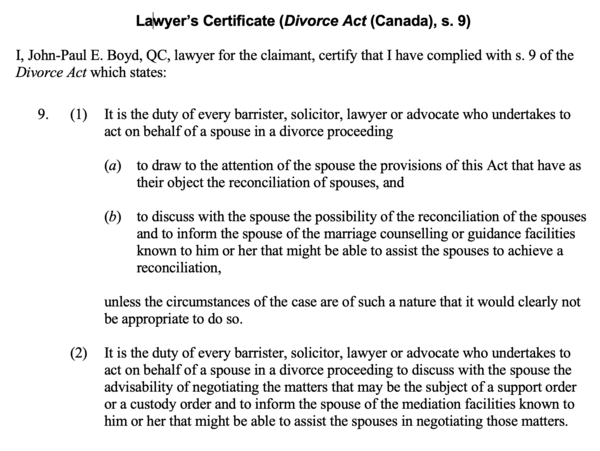 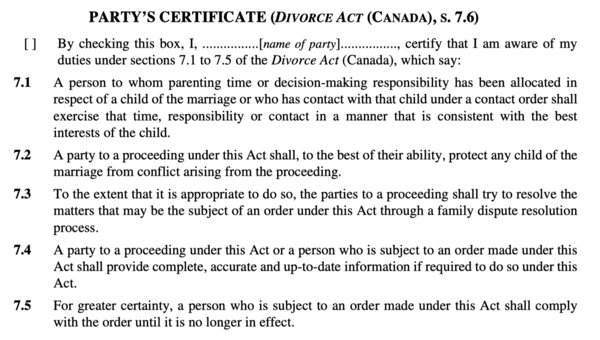 Relocation Forms in the Divorce Act

The form used by parents who want to move is called a Notice of Relocation Form. This is a fairly simple fill-in-the-blanks form available from the website of the federal Department of Justice in fillable PDF format and in a version that can be filled out online.

The form used by people with contact is a Notice of Change in Place of Residence: Person with Contact form. This is also available from the website of the federal Department of Justice.

Under section 16.91, someone with parenting time or decision-making responsibility who objects to a parent moving away after separation can either apply to court to stop the move or complete a form expressing their objection. (An objection is important because under section 16.91(1)(b), a parent who wants to move away can do that as long as there is no agreement, award or order preventing them from moving and no one with parenting time or decision-making responsibility has objected to the parent's plans to move.)

The form used by someone who wants to object to a proposed move is called a Objection to Relocation Form. This too is a fairly simple fill-in-the-blanks form available from the website of the federal Department of Justice in fillable PDF format and in a version that can be filled out online.